So, all components are bought and it is time to build the computer. The NZXT Hush 2 case that I’ve chosen is quite convenient for building a computer. The cable management space is wide enough, but the rubber garments on the holes to this space fall away easily which is a bit disappointing. The chosen Antec True Power PSU is partly modular so it reduced the cable allocation problem. Despite that the case has eight 3.5” HDD slots I wouldn’t count on it. Firstly, the lowest slot can’t be used with the additional fan installed. Secondly, it seems to me that there won’t be enough airflow to cool down all HDD drives if they are installed in each slot because of a small gap between them (especially with reduced fan speed). So, I wouldn’t install more than four 3.5” HDDs in this case with maybe up to three 2.5” HDDs or SSDs in between.

Here is my computer: 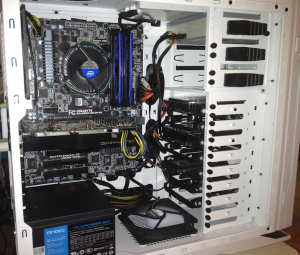 I decided to install two operation systems: Windows 7 64-bit and Mac OS Lion. The main system is Mac OS. I need Windows only for certain programs that don’t have Mac OS version and games. It is worth to install 64-bit version of Windows, because 32-bit version doesn’t support more than 8GB of RAM. Linux also can be installed as a third system if required.

64 MB SSD drive is used only for Mac OS in my computer. Windows 7 is installed on 60GB NTFS partition on 1TB. Also, this HDD has 650GB HFS+ partition for Mac OS data and a user folder. The rest space is FAT32 partition for Windows data and proframs. On the second 1TB HDD I’ve created a 60GB HFS+ partition to clone SSD drive on it. It allows to quickly boot from this partition if Mac OS is broken (for instance by incompatible update) and clone it back to SSD. The rest space on the second HDD is formatted to HFS+ file system and is used for backup of the first HDD by Mac OS tools and scheduler.

It is important to install Windows 7 first, because it creates its own partition on the first drive and ruins installations of other systems. Also, all drives, except the one where Windows 7 is going to be installed, should be disconnected. They can be connected back after Window 7 installation completed.

A lot of up to day information about Mac OS installation can be found here: http://lifehacker.com/5841604/the-always-up+to+date-guide-to-building-a-hackintosh. I used the method described there.

To install Mac OS Lion, I’ve bought it through AppStore on my iMac. After it had been downloaded I cancelled further installation to keep the installer, which is deleted automatically after installation. I’ve backed up this file to another drive (file is “Install Mac OS X Lion Application.app” in “Applications” folder).

A bootable flash drive had to be prepared on the next step. A USB drive of at least 8GB is required. It can be performed with UniBeast program (can be downloaded here: http://www.tonymacx86.com/downloads). The USB drive needs to be formatted as one “Mac OS X Extended Journaled” partition with “Master Boot Record” option (“Option…” button) in “Disk Utility” program (it can be found in “Utlities” folder in “Applications”).

After that the UniBeast program was launched and USB drive was chosen in the menu. On the next screen option “App Store” was chosen. It takes up to 20 minutes to prepare the USB drive and it looks like the program has been frozen. But have some patience and do not turn the computer off or disconnect the USB drive.

Also, there are options of purchasing Lion without using another Mac computer. Please search it in the Internet.

On the next step the USB drive is used to boot up the new Hackintosh computer. USB drive has to be chosen as primary boot drive in the BIOS setup. The chose my USB drive on the first screen that appeared after boot. The installer launched and suggested to choose system language. On the next screen I launch “Disk Utility” which can be found in the “Utilities” menu on top of the screen. I used it to create “Mac OS Extended (Journaled)” partition on SSD drive for the system installation. “GUID” option has to be chosen in “Options…” menu.

After some time Mac OS Lion was successfully installed and launched. But it couldn’t boot without the USB drive yet. I restarted the computer, chose the USB drive on the first screen and partition where Mac OS had been installed on the second screen. No I could to install all necessary drivers. MultiBeast utility was used for this purpose (can be downloaded here: http://www.tonymacx86.com/downloads). DSDT file with all setups for the motherboard is also required (can be downloaded here: http://www.tonymacx86.com/dsdt). It is important to rename the DSDT file to “DSDT.aml” and put it on Desktop. It will allow MultiBeast to find it.

I would recommend to make a clone of SSD drive on this stage with the utility of choice (I used “Carbon Copy Cloner”). It will help to quickly restore the system on SSD drive if you choose incorrect options and system cannot boot any more.

I launched MultiBeast and ticked the following options: 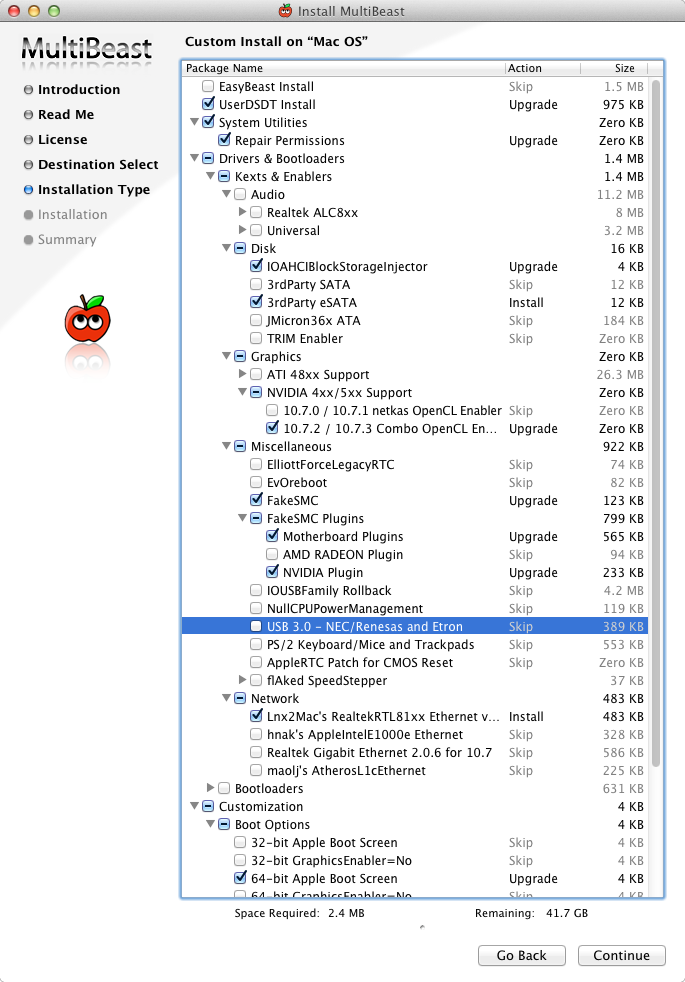 These options depend on the components that were used to build the computer.

After completed installation I turned off the computer, removed USB drive, turned on the computer and setup SSD as a priority boot drive in BIOS. Mac OS Lion booted up without any problems. Video card, Ethernet, sound, web cam – all worked without any additional steps.

To launch windows I have to press any button when I see the shrinking blue strip during the computer boot. It allows me to choose the drive to boot from. It can be Windows 7 (“System Reserved” partition) or my cloned Mac OS drive for system restore.

I’m very happy how my Hackintosh is working. For instance video coding takes about 7 times less than on my old iMac. Thanks to SSD drive, the system boots up very quickly and programs launches in a matter of second or two. On the 1st and 2nd fan speed it is almost silent, so I use the 2nd speed as a main one. Sometimes, just in case, I use the 3rd speed if I run a game or video coding but I don’t think it is necessary. Only in this mode slight noise appears. The only thing that doesn’t work on my Hackintosh is sleep mode. But as far as I know it can be solved. I’m going to fix it later.

So, that’s it. I’ve received Apple Bluetooth module and now I’m doing the adapter to connect it to my Hackintosh. I’ll make a post about it later. Stay tuned! Subscribe to RSS and leave your comments. See ya!

PS. All my posts about Hackintosh you can find here.