After the trial project of the “UT-88′ computer, lets start with a much more serious project. We will design and build another Soviet computer – AGAT-7. In this case the DE1 board will be used only for prototyping – the computer will be built on its own board. So, lets see what this computer was. 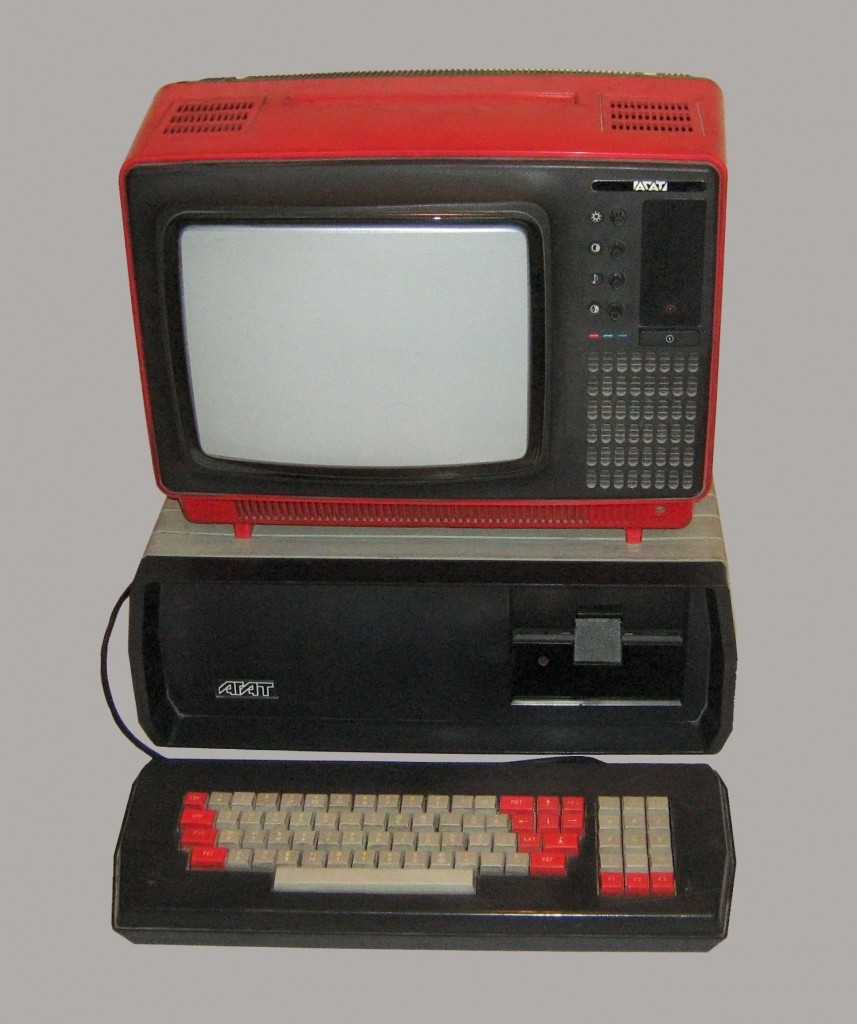 The manufacturing of the Agat-7 computer started in the USSR in 1984. In basic configuration it had following specifications:

It wasn’t a hobbiest conputer. It was very expensive for home users – 3,900 rubles, which is more than a half of a “LADA” car price in the Soviet Union at that time. Usialy it was supplied to schools and organisations where it achieved a lot of fans. As for me, the first time I tried Agat-7 was in the second half of 80’s in a computer club in Moscow. And it was the first computer in my life that I tried.

Agat-7 had a mother board and extension cards – very similar to modern computers. The motherboard has 7 slots numbered from 0 to 6. Slot 1 was always occupied by CPU module with 6502 processor and 32Kbytes of RAM.

Slot 0 could be used for so called “Cell 121” extension board. This board had its own RAM and video adapter with Apple-][+ graphic modes and allowed to launch programs and games from this computer on Agat-7

32 Kbytes ROM emulation module usualy was installed in the slot 2, and extended 32 Kbytes RAM module – in the slot 4. So, all togeather with CPU module they made 96Kbytes of memory. These two boards were the same – the only difference was jumpers setup on them. ROM emulation mode allowed to use it as write protected memory. Also, it could replace computer setup program from ROM. It added quite a lot of flexibility to Agat-7.

Slot 6 was could be used for other extension board. For instance, it could be a serial-parallel interface board which allowed the computer to communicate with other devises such as another computer, printer or even a mouse!

Also, Agat-7 had a speaker and a tape in/out port, which almost never had been used.

But interestingly, there was an early version of the computer that had a CPU module made only on descrete components, which were simulated 6502 CPU! This “CPU” was 30% slower than 6502 but had some additional instructions. It was done because of a shortage in 6502 compatable processors in USSR at that time.

Opposit to “UT-88”, there were a lot of programs for Agat-7. Also, some Apple-][ programs were adapted. I’m sure that there are a lot of people who would like to try this computer now. In case if enough interest to the project is expressed, a kit for DIY will be created.

Some more information about this computer you can find in Wikipedia.

In the next post we will discuss a concept of the computer, what it will include and what solutions will be used. See ya!